Believe It or NotBizarreWeird Stuff 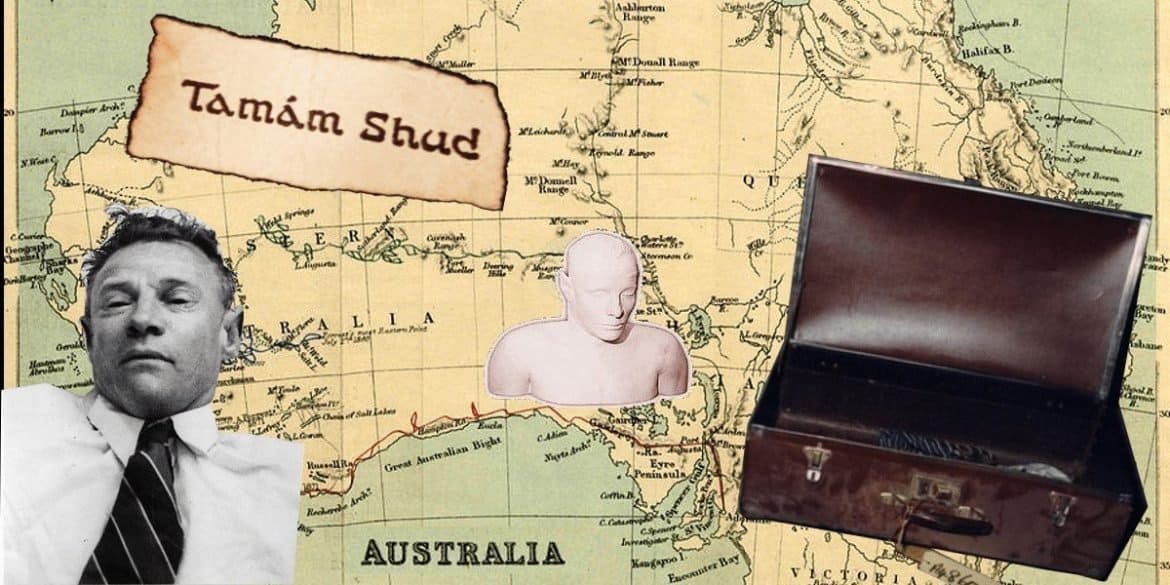 It’s Australia, December 1st, 1948, at 6:30am. The police have just been contacted about reports of a dead body on a quiet strip of land known as Somerton Beach, about ten miles south of Adelaide. An unlit cigarette lay on the ear of the dead man on Australia’s Somerton Beach. Later officials would find the hidden code Tamam Shud. While another that had been smoked lay on his shirt collar.

His pockets contain a train ticket, a bus ticket, a comb, a half-empty package of Juicy Fruit, and no wallet. No sign of struggle, no blood, no vomit, and nobody can account for who this man is or where he came from. What I’ve just described may sound like the start to a Twilight Zone, but it only gets stranger from here.

A Man Unknown To Anybody, but Tamam Shud

This man, who would go on to be known at the Dead Man On Australia’s Somerton Beach. His death had several mysterious qualities surrounding it, beyond the previously mentioned. For instance, his clothes, which were of “fairly good quality,” according to the coroner, had all identification tags removed.

The autopsy showed no apparent cause of death. One of the examiners believed the death may have been caused by heart failure. The head coroner found his heart to be “the heart of a man in good physical training,” because, “[t]he muscle was quite tough and firm.” Poison was considered, but no traces were found, and his body did not exhibit the qualities associated with poisoning (e.g., no vomiting).

The cause of death was listed as unknown. Due to the lack of identification, investigators made a cast of the man’s bust, allowing for future identification to be possible.

A few days after the official inquest had begun, a small strip of paper was found in the smallest pocket of his trousers with only the words “Tamam Shud” on one side. It was later determined it roughly translated to “Ended” or “Finished.” A Turkish local at the time contended it rendered as “fed up.”

It was determined, after consulting the University of Adelaide. That this piece of paper almost certainly came from an English translation of a Persian book of poetry known as the Rubaiyat of Omar Khayyam, not something ubiquitous for the time. Do you hear The Twilight Zone theme? I do.

The police attempted to gather any and all possible witnesses. At 7:00pm on November 30th, a man saw the not quite deceased, Dead Man On Australia’s Somerton Beach sitting in the same spot he was ultimately found. He claims he saw him lift his right arm, outstretched, and then it went limp (This is the same witness who found the man the following morning and reported it to the police).

Half an hour later at 7:30pm, a man and woman claim they saw the Dead Man On Australia’s Somerton Beach in the position he was found in, and that they could not say for sure whether or not he had moved.

Years later, in 1959, a witness came forward claiming he saw a well-dressed man carrying another man on the beach that night, but this has never been corroborated. And that’s all anyone saw of this man that night.

More Clues about the Dead Man On Australia’s Somerton Beach

One month after the discovery of the body and the hidden message Tamam Shud, a suitcase was found at the Adelaide Railway Station. This was the same station for which the rail ticket in the dead Man On Australia’s Somerton Beach pocket had listed as the origin station. It was left in the baggage claim on November 30th and never picked up.

The suitcase contained clothes of a similar size to the man. Strangely, all tags removed, as well as the thread matching stitching on the trousers the man was wearing at the time of death. The suitcase also contained a stenciling kit most often used by officers on merchant ships for stenciling cargo. Pretty much this adds up to a big fat “?”, right?

There is one witness account that I left out until now.  I have never seen it mentioned anywhere else during any discussion on Dead Man On Australia’s Somerton Beach.  I think it is incredibly relevant to the point. And I think there’s a conspiracy for its absence.

From the police report dated December 22nd, 1948 (21 days after the body was found), a man named Brian Joseph Dittmar had gone to the city morgue twice to see the man. He claimed he knew exactly who he was. He said the man’s name was Jack Thomas McLean and that he worked on an interstate ship. The man knew this because he worked at Port Adelaide. He had met the man twice in 1945, confirming that he was a seaman and had experience as a boxer.

What’s remarkable about this is that Dittmar gave this information to the police BEFORE, discovering the suitcase. And why is that important? Because the suitcase contained stenciling materials common to those used by ship crew to mark cargo.

Australian police never could confirm the existence of the name given by Dittmar, and his account was deemed “not very satisfactory” by investigators. This account is omitted from almost all discussions of the case.

No Evidence Except Maybe Tamam Shud

The police were still intent on solving the case. It was theorized that the Dead Man On Australia’s Somerton Beach committed suicide, but nobody knows how. It was speculated he was killed by another, but there was similarly no evidence to back this up.

The mystery of the poetry was furthered by the discovery of the book it came from. It was brought to the police by a man who claimed he found it in the backseat of his car (it wasn’t uncommon for people to leave their windows down) and assumed someone stashed it there. It wasn’t until he heard the police looking for this precise book that he contacted them. The ripped page was a match.

Still, there were more—indentations in the book that further investigation revealed to be two phone numbers and an indecipherable code. One of the numbers was for a bank, and the other was for a woman named Jessica Thomson.

Investigators went to the home of Jessica Thomson (nee Harkness). When showed the bust of the man, one investigator thought she was on the verge of fainting, but Thomson maintained she had no idea who the man was. She did, however, own a copy of the Rubaiyat, and told police she gave a copy to a British airman named Alf Boxall during the war.

Boxall is who the police presumed the dead man was until they confirmed Boxall was, in fact, alive and well. When interviewed, he claimed no knowledge of the Dead Man On Australia’s Somerton Beach.

He stated that he hadn’t seen Mrs. Thomson for over four years, but that he did own a copy of the Rubaiyat, which police examined and found to be normal. That’s three separate copies of a relatively obscure book of Persian poetry, all related to this case.

Oh, There are A Lot of Theories about Dead Man On Australia’s Somerton Beach

There are theories, one popular opinion is that he was poisoned as a result of Cold War espionage. Jessica Thomson’s daughter was interviewed by the Australian broadcast of 60 Minutes in 2013. She claimed her mother knew Russian. Still, she never explained where or from whom she learned the language.

Her mother told her she lied to the police about the Dead Man On Australia’s Somerton Beach. She had known who the man. However, his identity was “known to a level higher than the police force.”

The other evidence that emerged in 2011 was an I.D. card issued to an H.C. Reynolds by the U.S. Department of Labor. It lists him as a British national, and that he was a “seaman.” Rare genetic features in his ears and teeth have also led the suspicion that Jessica Thomson had a child with this man. Her son Robin exhibits these same characteristics (a chance, investigators say, is somewhere between 1 in 10,000,000 to 1 in 20,000,000).

Basically, Nobody Know Who the Dead Man On Australia’s Somerton Beach Was

Basically, nobody freaking knows what the deal is. Untraceable position? Three copies of a rare book of Persian poetry, and we didn’t even get to deep into the fact that the code in the book was uncrackable. Why did he have the torn paper in his pocket? Why did he have an unused train ticket if he was planning on committing suicide? Who was Jessica Thomson, and what was her actual relationship with the man? Maybe a Cold War espionage assassination, perhaps it was aliens. I eventually can always be blamed on them. We just don’t know.

Liked it? Would you please take a moment to support our work?

More on this Topic

Become a Patreon
Donate with Paypal

At Global Bizarre, we understand there are elements of this world that cannot easily be comprehended. We don't accommodate a more comfortable picture of reality. Instead, Global Bizarre spans the gap between life's everyday experiences and the mysterious. Mingling the supernatural, metaphysical, universal wisdom, timely tidbits, with noteworthy nonsense, delivering a surprisingly magical elixir of life here on MAMA EARTH.
Global Bizarre goes beyond the daily physical realm of reality to enlighten our readers. Asking the tough questions, are you ready to open your mind to other possibilities?