I would argue that there are few women in mysticism that have had as big an impact as Pamela Colman Smith.  While the names Dion Fortune and Helena Blavatsky are known for their theoretical and metaphysical contributions to mystical and occult thought, Pamela Colman Smith’s work has been the source of divination and mystical interpretation for over one hundred years.

In fact, without even knowing it, you may have some of her work in your home right now.  The illustrations on the most famous tarot deck in the world, the Rider-Waite deck, were created by Pamela Colman Smith.

Born in 1881 in central London to two American parents, Smith was not a typical English school child.  Having American parents was not typical, especially since there were still living Britons who fought in the War of 1812 (seriously), and her parents themselves were fairly well connected.  Her father’s father (her grandfather) was the mayor of Brooklyn (this was before the boroughs of New York united into what we now call New York City).  Her mother’s brother was Samuel Colman, famous for his paintings of the Hudson River.

But Pamela wasn’t long for London.  When she was eleven, in 1889, her father got a job managing the development of the Jamaican railroad, and so the family moved to Jamaica.  Her tenure in Jamaica was relatively short-lived, and by the time Pamela was 15 she settled in Brooklyn, becoming a student at the Pratt Institute.  The Pratt Institute, while well known today, was only six years old at the time.  She studied art and illustration.

Her mother, still in Jamaica, passed away in 1896.  Pamela was also prone to sickness, and spent much of her time in Brooklyn ill, ultimately dropping out of the Pratt Institute and never receiving her degree.  Despite this, she worked as an illustrator, illustrating a few books, including two books of her own, and one by Bram Stoker (of Dracula fame).

Soon after, in 1899, word that her father had passed away reached Smith.  This left Pamela Colman Smith without any parents at the age of 21.

The same year her father passed she returned to London.  Her illustration work continued, with work on multiple books regarding Jamaican folklore.  The years she spent in Jamaica surely made her a good candidate for such work.  She also illustrated work for one W. B. Yeats, an occultist in his own right.

Yeats would,  in 1901, convince Smith to make a decision that would change the course of her legacy.  She joined the Hermetic Order of the Golden Dawn, famed occult organization featuring those like Aleister Crowley.  It was at Golden Dawn that Smith met Arthur Edward Waite, known professionally as A.E. Waite.

Waite deserves an article unto himself for his contributions to the study of the occult and western esotericism, but it’s his relationship with Smith that would give both of them a permanent legacy.

It was at this time that Golden Dawn was going through significant changes, with disputes over leadership, and after reincarnations and successor organizations, Waite and Smith joined the Holy Order of the Golden Dawn.  It was here in 1909 that Waite commissioned a tarot deck with original artwork.

Waite was the true occult scholar, and he gave Smith written descriptions for all of the Major Arcana.  He also provided the order the cards were to appear, and the general symbolism of each card.  The rest was up to Pamela Colman Smith.

Smith wrote in a letter to an art friend that she had completed “80 pictures” between April and October 1909.  It’s widely understood that she was referring to the 78 tarot cards that Waite had commissioned.  To complete these illustrations, which have gone on to be the standard by which other tarot decks are measured in only six months is quite a feat.  That’s more than thirteen a month, or about one card every two and a half days.

The deck is called the “Rider-Waite” deck after Rider, the company that published the deck, and A.E. Waite.  However, in recent times the name “Rider-Waite-Smith”, or simply “Waite-Smith” deck has come into use to acknowledge the contribution of Pamela Colman Smith.

Relatively soon after her dabbling with the occult, Smith converted to Catholicism in 1911.  She continued working as an artist, but found relatively little commercial success.  After the end of World War I, she received a rather substantial inheritance from her uncle who had passed.  It was enough money for her to buy a home in Cornwall, England.

She moved into the home with her long-time friend Nora Lake.  It’s speculated that the two were lovers, but they could never reveal their relationship due to the stigma of the era.  Smith would never marry or have children.  Her work continued as a commercial artist, but she ultimately died in 1951 at the age of 70.  She died broke and had her remaining artwork auctioned off.  She left her estate to her companion, Nora. 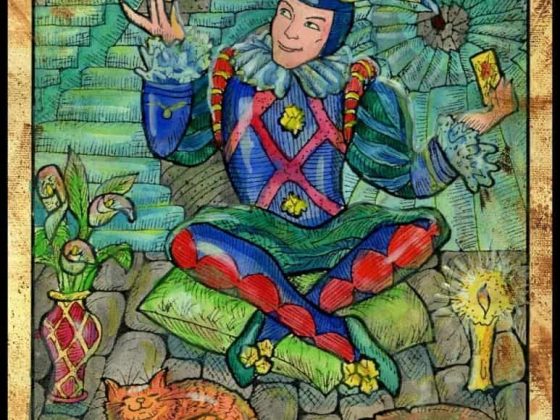