Albert Einstein was exhausted. For the third night in a row, his baby son Hans, crying, kept the household awake until dawn. When Albert finally dozed off âŚ it was time to get up and go to work. He couldn’t skip a day. He needed the job to support his young family.

Walking briskly to the Patent Office, where he was a “Technical Expert, Third Class,” Albert worried about his mother. She was getting older and frail, and she didn’t approve of his marriage to Mileva. Relations were strained. Albert glanced at a passing shop window. His hair was a mess; he had forgotten to comb it again.

Work. Family. Making ends meet. Albert felt all the pressure and responsibility of any young husband and father.

In 1905, at the age of 26 and four years before he was able to get a job as a professor of physics, Einstein published five of the most important papers in the history of science–all written in his “spare time.” He proved that atoms and molecules existed. Before 1905, scientists weren’t sure about that. He argued that light came in little bits (later called “photons”) and thus laid the foundation for quantum mechanics. He described his theory of special relativity: space and time were threads in a common fabric, he proposed, which could be bent, stretched and twisted.

Before Einstein, the last scientist who had such a creative outburst was Sir Isaac Newton. It happened in 1666 when Newton secluded himself at his mother’s farm to avoid an outbreak of plague at Cambridge. With nothing better to do, he developed his Theory of Universal Gravitation.

For centuries historians called 1666 Newton’s annus mirabilis, or “miracle year.” Now those words have a different meaning: Einstein and 1905. The United Nations has declared 2005 “The World Year of Physics” to celebrate the 100th anniversary of Einstein’s annus mirabilis. (Nobel prize winners and other top scientists will meet with the public next month to discuss Einstein’s work. Would you like to join them?)

Modern pop culture paints Einstein as a bushy-haired superthinker. His ideas, we’re told, were improbably far ahead of other scientists. He must have come from some other planet–maybe the same one Newton grew up on.

“Einstein was no space alien,” laughs Harvard University physicist and science historian Peter Galison. “He was a man of his time.” All of his 1905 papers unraveled problems being worked on, with mixed success, by other scientists. “If Einstein hadn’t been born, [those papers] would have been written in some form, eventually, by others,” Galison believes.

What’s remarkable about 1905 is that a single person authored all five papers, plus the original, irreverent way Einstein came to his conclusions.

For example: the photoelectric effect. This was a puzzle in the early 1900s. When light hits a metal, like zinc, electrons fly off. This can happen only if light comes in little packets concentrated enough to knock an electron loose. A spread-out wave wouldn’t do the photoelectric trick.

The solution seems simple–light is particulate. Indeed, this is the solution Einstein proposed in 1905 and won the Nobel Prize for in 1921. Other physicists like Max Planck (working on a related problem: blackbody radiation), more senior and experienced than Einstein, were closing in on the answer, but Einstein got there first. Why?

It’s a question of authority.

“In Einstein’s day, if you tried to say that light was made of particles, you found yourself disagreeing with physicist James Clerk Maxwell. Nobody wanted to do that,” says Galison. Maxwell’s equations were enormously successful, unifying the physics of electricity, magnetism and optics. Maxwell had proved beyond any doubt that light was an electromagnetic wave. Maxwell was an Authority Figure.

Einstein didn’t give a fig for authority. He didn’t resist being told what to do, not so much, but he hated being told what was true. Even as a child he was constantly doubting and questioning. “Your mere presence here undermines the class’s respect for me,” spat his 7th grade teacher, Dr. Joseph Degenhart. (Degenhart also predicted that Einstein “would never get anywhere in life.”) This character flaw was to be a key ingredient in Einstein’s discoveries.

“IN 1905,” NOTES GALISON, “EINSTEIN HAD JUST RECEIVED HIS PH.D. HE WASN’T BEHOLDEN TO A THESIS ADVISOR OR ANY OTHER AUTHORITY FIGURE.” HIS MIND WAS FREE TO ROAM ACCORDINGLY.

In retrospect, Maxwell was right. Light is a wave. But Einstein was right, too. Light is a particle. This bizarre duality baffles Physics 101 students today just as it baffled Einstein in 1905. How can light be both? Einstein had no idea.

That didn’t slow him down. Disdaining caution, Einstein adopted the intuitive leap as a basic tool. “I believe in intuition and inspiration,” he wrote in 1931. “At times I feel certain I am right while not knowing the reason.”

Although Einstein’s five papers were published in a single year, he had been thinking about physics, deeply, since childhood. “Science was dinner-table conversation in the Einstein household,” explains Galison. Albert’s father Hermann and uncle Jakob ran a German company making such things as dynamos, arc lamps, light bulbs and telephones. This was high-tech at the turn of the century, “like a Silicon Valley company would be today,” notes Galison. “Albert’s interest in science and technology came naturally.”

Einstein’s parents sometimes took Albert to parties. No babysitter was required: Albert sat on the couch, totally absorbed, quietly doing math problems while others danced around him. Pencil and paper were Albert’s GameBoy!

He had impressive powers of concentration. Einstein’s sister, Maja, recalled “…even when there was a lot of noise, he could lie down on the sofa, pick up a pen and paper, precariously balance an inkwell on the backrest and engross himself in a problem so much that the background noise stimulated rather than disturbed him.”

Einstein was clearly intelligent, but not outlandishly more so than his peers. “I have no special talents,” he claimed, “I am only passionately curious.” And again: “The contrast between the popular assessment of my powers … and the reality is simply grotesque.” Einstein credited his discoveries to imagination and pesky questioning more so than orthodox intelligence.

Later in life, it should be remembered, he struggled mightily to produce a unified field theory, combining gravity with other forces of nature. He failed. Einstein’s brainpower was not limitless.

Neither was Einstein’s brain. It was removed without permission by Dr. Thomas Harvey in 1955 when Einstein died. He probably expected to find something extraordinary: Einstein’s mother Pauline had famously worried that baby Einstein’s head was lopsided. (Einstein’s grandmother had a different concern: “Much too fat!”) But Einstein’s brain looked much like any other, gray, crinkly, and, if anything, a trifle smaller than average.

Detailed studies of Einstein’s brain are few and recent. In 1985, for instance, Prof. Marian Diamond of UC Berkeley reported an above-average number of glial cells (which nourish neurons) in areas of the left hemisphere thought to control math skills. In 1999, neuroscientist Sandra Witelson reported that Einstein’s inferior parietal lobe, an area related to mathematical reasoning, was 15% wider than normal. Furthermore, she found, the Slyvian fissure, a groove that normally extends from the front of the brain to the back, did not go all the way in Einstein’s case. Might this have allowed greater connectivity among different parts of Einstein’s brain?

It’s the fundamental emotion that Einstein felt, walking to work, awake with the baby, sitting at the dinner table. Wonder beat exhaustion, every day. 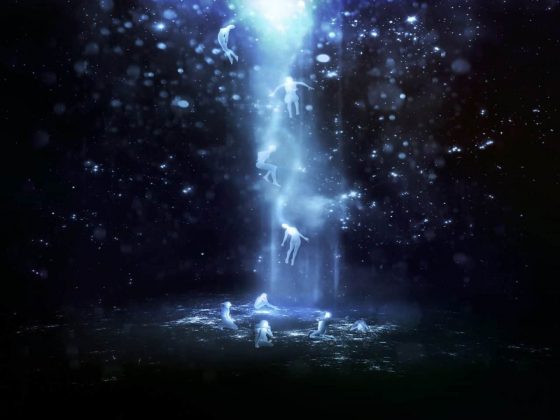